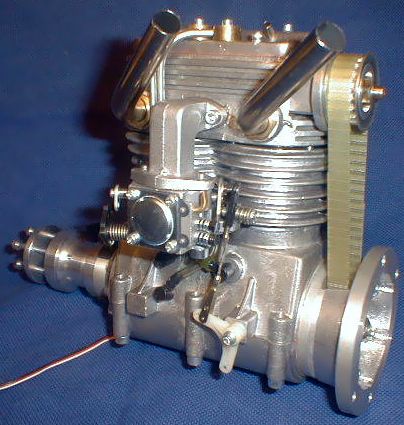 The VT 85 2R is a two-cylinder four stroke in-line gasoline engine, specially constructed for the use in narrow cowls of large scale models. The compact construction is achieved by a camshaft placed in the cylinder head with 4 ball bearings where the rocker arms are actuated directly. It is driven by a timing belt placed at the backside of the engine.
To avoid thermical problems of the rear cylinder in practical use, the cylinder-block and the cylinder head are constructed as a one-piece engine-part.
The crankshaft with an ignition angle of 180° is pivoted with 4 ball bearings for a smooth run, a long life and a spontaneous speed-up reaction. High torque is available from low engine speed up to maximum of rpm, combined with a reliable idle run.
The two cylinders of the VT85 2R are fed by a walbro pump carburettor with a choke flap;
combined with a 4,8V electronic ignition-system with integrated ignition advance the starting of the cold or hot engine is uncritical and easy to perform.
The VT 85 2R doesn`t need a special engine bearer; it is simply fixed at the engine-dome using D-Locks and 5mm screws: A secure and simple assembly for all fuselage-motor-frames.-
The mounting position can be chosen freely, either an upright, a horizontal or a hanging position is suitable. –
As the connecting rods are equipped with needle bearings, a gasoline-oil-mix of 30:1 is adequate.-
As a further option individual constructions of silencers are available; special solutions for every model and every cowl are possible. 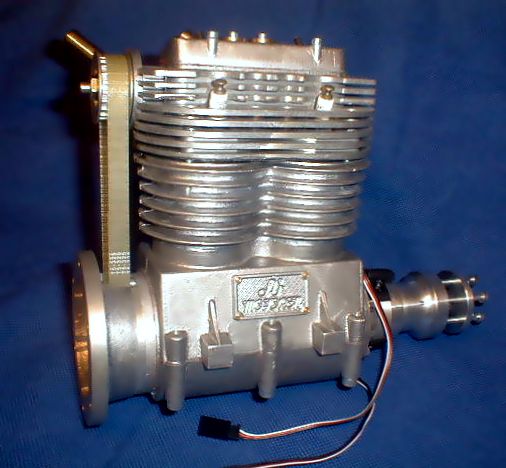